EPA calls for ‘immediate increase’ in pace of emissions reductions

A “significant and immediate increase” in the scale and pace of greenhouse gas emission reductions is required if Ireland is to have any chance of meeting demanding targets in the Climate Bill, the Environmental Protection Agency (EPA) has warned.

The programme for government and the Bill commit to a 51 per cent reduction in emissions by 2030 based on a 2018 baseline – averaged at 7 per cent a year – which matches increased EU ambition agreed over the past year.

The EPA on Tuesday published its latest emissions projections for the period 2020-2040, which will inform the setting of a first five-year carbon budget, due to be agreed by the Government later this year.

Projections indicate under “the best-case scenario with all the measures set out in the 2019 Climate Action Plan fully implemented”, Ireland’s 2030 emissions will only be 24 per cent lower than 2018 levels – a 2 per cent per annum reduction from 2021 to 2030.

To achieve a 51 per cent emissions reduction by 2030, significant new measures will need to be identified and implemented, the EPA says.

The analysis indicates Ireland is projected to have exceeded its 2013-2020 EU “effort sharing decision” target by 12.2 million tonnes of CO2 equivalent – the main international mechanism spelling out climate mitigation commitments.

“These projections show the next decade needs to be one of major developments and advances in relation to Ireland’s response to climate change,” EPA director general Laura Burke said. 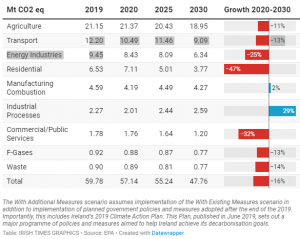 The report says “a ‘green recovery’ will give Ireland an opportunity to rebuild our economy and generate new jobs while responding to this challenge”.

Covid-19 lockdown had a dramatic impact on emissions for last year and this year as a result of a sharp decline in economic activity and travel, but this risks rebounding.

“To avoid a surge in emissions as the economy recovers, as a minimum the full range of actions already committed to must be implemented without delay,” the EPA adds.

These measures are projected to contribute to emissions savings of 58 million tonnes of CO2 equivalent by 2030 when compared to existing measures.

In agriculture, it says a reduction of at least 16.5 million tonnes of CO2 equivalent between this year and 2030 is achievable by accelerated uptake of measures such as low-emissions slurry spreading techniques and switching to “stabilised urea fertilisers” for crops and pasture.

Having 1 million electric vehicles (EVs) on Irish roads by 2030, including 840,000 passenger EVs and 95,000 electric vans and trucks, “will help achieve a projected additional emission saving from the sector” of 13.2 million tonnes of CO2 equivalent over the period from this year to 2030, it says.

Renewable energy providing 70 per cent of electricity generated is projected to lead to a 25 per cent reduction in energy emissions by 2030 through scale-up of onshore and offshore wind energy projects mainly.

Installation of 600,000 heat pumps and retrofitting 500,000 homes for improved energy efficiency by 2030 is projected to reduce the energy used for space and water heating in homes by 44 per cent, it adds.

“As far back as 2015 EPA projections indicated 2020 EU targets could be met with the implementation of identified measures. Faster than anticipated emissions growth from key sectors and slow implementation of measures resulted in the target being missed by a wide margin,” he said.

EU emission targets and reduction obligations are split into two categories. The first covers the large energy and power industry controlled under the EU emissions trading scheme. The second deals with sectors such as agriculture, transport, residential, commercial, waste and non-energy intensive industry. The EPA produces the projections on an annual basis for all sectors in collaboration with relevant State and other bodies.

Details of the projections are available at www.epa.ie